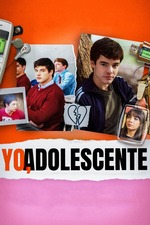 I was shocked by this.

I don't usually like including spoilers in my reviews but this is one instance for which it feels appropriate. If you want to avoid any spoilers for this, don't read on.

Okay, so, after taking a step back and seeing the big picture intention behind 'YO, ADOLESCENTE''s upsetting content, I get what it was going for. BUT the way this script and overall film are structured feel flippant to a glaring degree. If you've seen this, you know why. While the subject of suicidal ideation appears in peripheral ways throughout it, Lucas Santa Ana's film never lays the pivotal groundwork for a story that culminates with its protagonist committing suicide. Whether its the playful tone, upbeat characterizations, or the profoundly ill-advised way it lets us into the protagonist's mindset while keeping us arms-length away from the stuff that really matters, none of this is handled the way it should be.

I can gather that the goal here was for us to feel the way the protagonist's family and friends feel in the wake of his actions but there are enough misdirecting elements here (including our aforementioned, deceptively 'partial' window into the character's internal perspective) to result in that late revelation feeling forced and tacked-on. Let me reiterate that: the main character's death feels more like a last-minute twist rather than as the devastating, preventable tragedy the film wants to present.

This is a film seemingly committed to illustrating why you should always check-in on the quiet ones in your life or on those you suspect might not be acting the way they truly feel. It's not wrong in positing that even good-looking, funny, cheery people can be suffering immensely behind that façade. It's an admirable mission, of course, but it's also one with a heavy responsibility that this feature does not meet. It's well-made and especially well-acted (and it's got the kind of refreshing take on discovering one's bisexuality, albeit messily that the world needs more of). Prior to the final stretch, it's even likable in a scrappy, youth-in-revolt kind of way. But none of that makes up for the clumsiness it approaches such a devastating topic with.