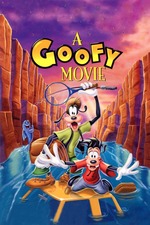 Goofy was always my favorite of the classic Mickey Mouse pals. Something about his carefree optimism and hilariously imperfect attempts at doing just about anything always appealed to me. It's in part because of that context of how silly (and winningly so) I believed Goofy to be that I'm stunned by how affecting his cinematic outing is and how much more depth it provides opportunities for Goofy to show us he's had all along.

A Goofy Movie is a beautifully-animated story about, well, the beauty of being yourself and of family that loves you unconditionally. It's a quick-footed dose of peak 90s color-infused warmth that, as much as I surely would have loved as a kid, packs a poignancy that is clearer and far more touching as a grown-up. The songs are great, capturing the wit that the clever 90s-era House of Mouse stewards continue to outshine many of their successors with. And the creative invention in the situational springboards for character development are as eye-catching as they are effective. This film is a gift and one I love, not just for reminding me of the happiness Goofy brought me as a kid but for showing me how a childhood staple can still impart new, appreciative feeling in me.

P.S. Tell those who are there for you how much you love them. After all, they really are the ones that make life as sweet as it can be.

Scavenger Hunt 71 - Watch an animated film from the 90s.