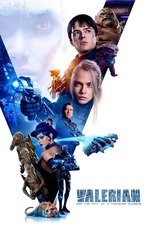 Valerian and the City of a Thousand Planets 2017 ★★

Valerian is terrible and at the same time I wish other movies were more like it. What obnoxious statement is that, you ask? Let me explain.

It starts off promising enough, with two sequences that consist of pure visual storytelling - one to establish the world of Alpha, one to introduce the plot. Unfortunately, afterwards people start talking. At first it's tolerable, then after about 40 minutes the convoluted exposition sets in and no one shuts their face again until another 100 (!) minutes later the credits roll. Of all horrible trends, why did Besson follow this one? He had full creative control, by definition this actually is an indie movie!

Then there's the elements I really liked (all to be found in the afore-mentioned first 40 minutes). The visuals are truly spectacular at times: there's a chase scene in two dimensions at the same time and our protagonist shatters a few more while he's at it. Talking about the protagonist (DeHaan), I don't mind him. His co-star Delevingne, on the other hand, just knows her model poses and in turn really rocks those colourful costumes. Also, the movie is full of wonderful creature designs.

To sum it up, with less focus on plot and exposition this movie could and should have been Big Trouble in Little Alpha. As it is, it is closer to Jupiter Ascending and the like.