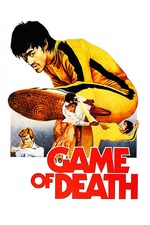 Just the most remarkable collection of 1970s bodies to display: not just Bruce Lee, but Kareem Abdul-Jabbar (who was also replaced by a double for a couple of early scenes), Sammo Hung, and Colleen Camp as well, each iconic in their own ways.

An accidental kind of a masterpiece. A film about the fungibility of non-white bodies, about how the colonialist/capitalist class sees bodies as commodities, to be exploited and tossed aside whenever convenient that itself ghoulishly repurposes a real Asian body to make a quick Hollywood buck. An assertion of control over a body iconic for its rebelliousness, the film is a perfect encapsulation of the process by which capital captures a popular revolution (or in this case, revolutionary figure) and sells it back to the consuming populace.

But in its calamitous mixture of real and fake, film clip and outtake, recreation and imitation, the film undermines itself, as the reality of Bruce Lee overwhelms the substitutes that the film/capital tries to replace it with. The real obliterates the fake, its power ultimately cannot be contained.

"One rebel begats another." (sic)

Sammo Hung's fight choreography is terrific, and the stunt teams are great (love Sammo's showcase and the fake Bruces are all good fighters--don't think I didn't spend the whole movie trying to pick out which kicks and leaps were Yuen Biao), but in the same way Bruce Lee the actor incinerates his imitators, so Lee's fights are so much more, well for lack of a better word, real than Sammo's. I think that may have been intentional on Hung's part.

One of the great unanswered questions of Hong Kong cinema is what would have happened had Bruce Lee lived. Would he have joined along with the new wave of choreographer/directors in the late 70s (Hung, Yuen Woo-ping, Lau Kar-leung), or would they have been subsumed within his style and superstar persona? Game of Death is as close as we'll ever get to an answer, along with Sammo's other great 1978 film, the Bruce Lee parody Enter the Fat Dragon.

Weirdly enough, the choreography in the latter film is more Lee-like (Sammo's impression of him is uncanny) than the choreography in Game of Death, where the whole point is supposedly a recreation of the deceased Lee. By tailoring the Game of Death fights more to his own style, and that of Yuen Biao and Kim Tai-jong, rather than merely imitate Lee's style (beyond the superficial sound effects, which like the English dubbing (even for actors who speak perfectly good English like Roy Chiao) serves only to flatten out non-white bodies for the American market), Sammo underlines that disconnect between the real Lee and the fakes.