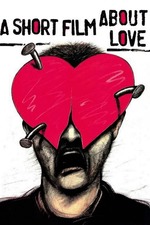 As I previously noted here, for logging purposes I’m going to consider DEKLAOG, SIX and A SHORT FILM ABOUT LOVE two different cuts of the same film. In which case I should note that this score is actually for the DEKALOG, SIX version, what I consider to be the superior one.

Previously likened this to REAR WINDOW, though now I see that’s a lazy comparison built on the very fundamental theme of voyeurism—this is infinitely richer, rooting itself not in a mere exercise of suspense or mystery, but a multifaceted portrayal of “love,” and how its very definition can shapeshift depending on context, emotion, experience, et al, coming dangerously close to overlapping boundaries with what we’d consider “obsession” or “sexuality.” The trickiest gambit here is balancing Tomek’s clearly contemptible behavior with his feeble personality, so rather than condemn him for essentially undergoing creepy/illegal acts of self-gratifying espionage, we end up pitying him, his frailty, his meekness, his ignorance. The role reversal that eventually takes place—a few moments too late, of course—is what continues to gut me, though ; Tomek becoming the hardened, loveless bystander, Magda now suppressed with infatuation, on a constant search for the boy and seemingly unable to get through to him. When she finally does, his monotonic, emotionless “I don’t watch you anymore” is absolutely carving, and precisely the reason I prefer DEKALOG, SIX to A SHORT FILM ABOUT LOVE, which introduces a (slightly) more uplifting, borderline-fairytale bent in its closing sequence. (Not to mention, DEKALOG, SIX is bookended perfectly, something that went completely unnoticed by me two years ago : in one of the opening shots, Tomek’s eyes are shown through a circular cut-out of a glass separator where he works at a post office while peering at Magda. The film ends on an exact reversal of this shot, now from Tomek’s point of view, with Magda’s eyes captured by the same circular sub-frame, only on the opposite end of the counter, and, metaphorically, the other end of the push/pull.) Godmother stuff is a bit [thonk], but this is an upper-echelon DEKLOG segment, without a doubt.