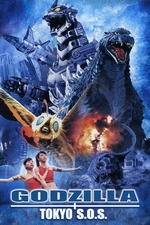 Godzilla and Friends Marathon: 44 of 46

This seems to be one of the more divisive films in the Godzilla franchise. There are many fans who consider it to be one of the worst Godzilla films. However, there also appears to be a large number of fans that love the two part story comprised of this and Godzilla Against MechaGodzilla, and who would consider it to be one of the high points in the franchise. Personally, I probably fall somewhere in the middle. I really love the idea of MechaGodzilla in general, and I really enjoyed the execution of that idea in these two films. Furthermore, anyone who's been following my reviews for the Godzilla franchise should know that the inclusion of Mothra is guaranteed to increase my enjoyment of the film. I also love that this is treated as a sequel to Mothra and that we see the return of one of the characters (Chujo) from that film. With that said, however, I did have some issues with this film. The story seems to meander a bit in the beginning, which made it difficult to fully engage with it until the monsters hit the scene. More importantly, once the monsters do make an appearance, Mothra's involvement is largely derivative of previous films. If you've seen the original Mothra, as well as Mothra vs. Godzilla, then you aren't really going to see anything new here with regards to Mothra. In fact, I think that's one of the main reasons that this film receives a lot of negative criticism. It's simply a matter of Godzilla fatigue. As the 27th Godzilla film produced by Toho, it doesn't bring a lot to the table in the way of new ideas. It focuses, rather, on rehashing and refining old ideas. So, for those who are tired of these ideas and want to see something new, it can be somewhat disappointing. If, on the other hand, you're someone who enjoys seeing a remixed version of classic stories, you're more likely to appreciate what's being done here.

The problem is, once a franchise grows to this size, new movies are always going to be derivative. There's only so many ways that you can present rubber suit monster wrestling. I suspect that a lot of fans who love the older Godzilla films, but don't like any of the newer stuff, are just tired of watching people in rubber suits throw each other into miniature buildings and that the only reason they still enjoy the old ones is out of nostalgia. I think that if you tried to take the franchise in a new direction, you get an equal number of people complaining that it's not a proper Godzilla movie anymore. We saw this with the 1998 American Godzilla. You can also see this sort of thing with the Friday the 13th films. People just want more films where Jason hacks up a bunch of horny teenagers at Crystal Lake. Typically, the films people like the least, in that franchise, are the ones that stray too far from that formula.

So, ultimately, filmmakers are damned if they do and damned if they don't. But, this film still has a great three-way brawl between Godzilla, Mothra, and Kiryu where Godzilla bites one of Mothra's legs off and then spits it out.