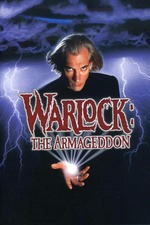 Oh no they killed Kenny.

The first Warlock film was decent, had a little bit of the Terminator with some good ideas. Although I wish the Amish guy joined them during the end, it would have made the airplane scene funnier but hey it's fine.

Going to this sequel, I was worried for a bit cause of the opening credits, not impressive with all the pauses but because it was from the director of Waxwork & Waxwork 2 I gave it some time for it to impress me....it didn't fail.

The highlight? Of course Julian Sands. He is given much to do and it looks like he is having fun. He gives a bit of Terminator mixed with the Wishmaster as well as once scene where its something the T-1000 would do. Some interesting shots like when Kenny gets shot and again during the end battle.

You get some nice creative kills whether its the aftermath or not, the ideas are fun. You do get an Evil Dead moment with the tree but don't worry nobody gets raped. Unfortunately, there are dated effects especially the flying scenes and many more. They don't hold up at all.

The rest of the cast? Meh, not much. Our two warriors are nothing special but its fine. I wish we had the 2 leads in the first movie but whatever I'll deal with it. For a moment Kenny looked like he was gonna be an asshole but then Dad comes in to save the day by murdering him...haha wtf. Since Kenny is a warrior, he gets a sort of a Jedi training, to the point where the score sounded like Star Wars for a bit. And whats with the carnival scene? I could have swore I saw one of the statues moving a bit. I guess they had no money to make one....maybe I was drunk.

Overall, yeah I recommend it. It's one of those sequels that I prefer more than the original especially in terms of its creativity. Just try to forgive some of the effects. Julian Sands is a joy to watch and since he is not in the third film....I'm a bit worried. He steals the show. Like I said before, the 2 leads aren't the greatest thing but its fine. Maybe they needed the Amish guy....