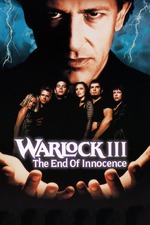 Ian West wasn't kidding, this was extremely dull and boring.

Damn it, you have the girl from Hellraiser, Brian from Brain Damage, the villain who works at Mondo Burger and yet they can't save the film.
Nothing against Bruce Payne, he was fine in Passenger 57 with his silly one-liners but here...eh, nothing interesting. Julian Sands was more fun to watch.

Honestly, this could have been a shitty generic haunted house movie, you didn't even need a Warlock. You have a laughable scene involving a mirror that's supposed to scare us to death....really?

Any positives? Umm....the historian's death had a decent effect....what else? The introduction to our characters was a bit different where the camera goes through their doors and you see some action inside. I don't know if that was the Warlock spying on them...no clue. Some tiny things towards the very end but nothing groundbreaking. It's really that forgettable, just the Warlock walking around and chatting with our teenagers. You could just simply look at your phone, it's that dull.

I rather have Aylmer giving me brain damage.

Overall, no, stay away from this. Just watch the first 2.