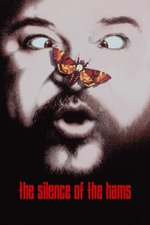 Good god, this was bad. At first, it looked like it was going to be decent at least but then slowly slowly it fell right in the garbage can. At least I chuckled in a couple of scenes at the beginning either it was funny or the idea that they actually thought this would be funny. I'm shocked at the cast. Even fucking John Carpenter and Joe Dante shared a scene together. As well as John Landis but good lord what were they thinking. Martin Balsam is back to play the same character in Psycho, except its his actual name.....okay. And of course, he gets to repeat his famous death scene which I don't even know what to say. Again, I was laughing at the idea of this happening.

The most horrendous scene is towards the scene where each character reveal that they are somebody else in disguise, it just goes on and on, fuck. Did they honestly think this would be funny?

Overall, no, fuck no. At least it's better than Plump Fiction cause that piece of shit didn't have one funny scene expect one tiny bit. But then again, that's not saying much. It's fast-paced so yeah that's a step up...I guess. Poor Billy Zane playing Jo Dee Fostar....get it? Oh well, at least he improved later on with Demon Knight.