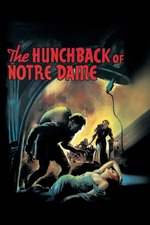 The Hunchback of Notre Dame

Author Victor Hugo's 1831 classic French novel has been rendered on film many times. Lon Chaney's 1923 portrayal of the deformed Quasimodo set the bar high for any actor who followed, but here's Charles Laughton willing to spend two-and-a-half hours a day with make-up artists to transform into the tortured character who rang the bells at the most celebrated cathedral in Paris.

The story from director William Dieterle is pretty much "by the book." It opens with the ringing of the bells of Notre Dame, followed by Chief Justice Jean Frollo (Cedric Hardwicke) expressing his concerns about the invention of the printing press to King Louis XI (Harry Davenport). The monarch, however, embraces change. He even believes the Earth may be round.

On the other hand, we see traveling gypsies turned away by Parisian gatekeepers because "foreigners" may no longer enter the city freely. Among those barred, although she sneaks in, is the beautiful Esmeralda, played by Maureen O'Hara making her American debut. And there's the frolicking at the Festival of Fools, when we see Quasimodo crowned King of Fools, while the real King comments on how "We extract pleasure from horror." A great Hoop-Tober quote!

When Elmeralda is discovered dancing seductively at the festival, she is ordered arrested by Frollo, so she flees to the cathedral for sanctuary. That's where she comes under the wing of Frollo's brother, the Archbishop Claude Frollo (Walter Hampden) and has the opportunity to implore the King to help her people. He says he'll think on it.

On the other hand, Esmeralda's first encounter with Quasimodo doesn't go well. He scares her into running away, and then chases after her. A mounted guard named Captain Phoebus (Alan Marshal) intervenes and lets her go free. He's obviously got an eye for pretty girls.

Other characters we meet include Clopin the King of Beggars (Thomas Mitchell) and his Queen (Minna Gombell), as well as the street poet Pierre Gringoire (Edmond O'Brien) and Phoebus's jealous fiancée Fleur de Lys (Helene Whitney). There's also Master Pierrat (Paul Newlan), who whips Quasimoto in public upon the orders of a deaf judge (Otto Hoffman).

Driven to outperform Universal's 1923 silent movie, RKO spent a whopping $1.8 million on the production and it shows, including a lavish $250,000 replica of Notre Dame built at the studio's Encino Ranch. Some critics have noted that "the elaborate sets tended to overwhelm the story." But I can't deny, it's impressive.

Even more impressive, the film was nominated for two Academy Awards -- Best Sound, Recording (John Aalberg) and Best Music, Scoring (Alfred Newman). It also has the sad distinction of being the only film screened at the inaugural Cannes Film Festival, as Hitler's invasion of Poland brought the event to an immediate halt.

As part of this year's Hoop-Tober Challenge, "Hunchback" satisfies two requirements: the fourth of nine different decades of horror and the second of "six films before 1970." Oddly enough, I still haven't seen Disney's 1996 animated version yet.