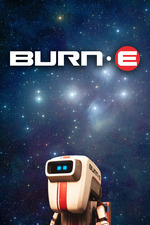 Short Animation - Before filmmaker Angus MacLane got his big break directing "Finding Dory" (2016), he made three shorts, and this was the first. Not only did he write and direct this eight-minute Pixar short, he also voiced the main character, a repair robot called BURN-E. Set in 2805 A.D., some 821 million miles from Earth, the fixer-upper spends most his time welding and mending broken equipment. However, the romance between WALL-E (Ben Burtt) and EVE (Elissa Knight) disrupts his routine, and poor BURN-E gets locked out of the Axiom spaceship. He'll get no help from the maintenance computer (Tessa Swigart) or the Captain (Jeff Garlin). The little guy has to figure out for himself how to get back in. A nice companion piece to the "WALL-E" (2008) DVD.