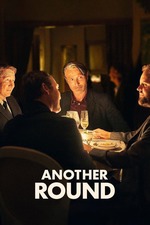 At a 40th birthday party, a group of boring, middle-aged high school teachers propose an “experiment” with daytime alcohol use. They claim to want to test a Norwegian scientist’s theory that the human beings perform better in perpetual states of intoxication. In reality, it’s an excuse to reclaim their youth and behave like their irresponsible students. With my 40th birthday weeks away, feeling older than dirt, after spending an entire year at home, this was a scenario I could relate to in no way whatsoever.