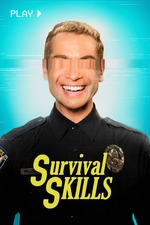 Shot in 4:3 and with added tracking loss, Survival Skills starts out as a training film from the late-1980s for rookie policemen, following an everyman named Jim in his first year on the job with Middletown Police. Vayu O’Donnell’s Jim is a blank slate who very quickly realises that life on the force is not always going to go by the book, and the film follows our cipher as he finds that the training he’s been given hasn’t quite prepared him for the job at hand.

Writer and director Quinn Armstrong imbues his debut feature with an unreal, hallucinogenic quality as the constructs of Jim’s exemplary life fail to withstand the reality of his surroundings, and O’Donnell plays Jim’s naivety to perfection. The training video is narrated by Stacy Keach with all the qualities of a man who has done these things for real, and able back-up comes in the shape of Jim’s partner Allison and abused wife Leah, played by Erica Kreutz and Emily Chisholm, respectively.

Survival Skills is at times disturbing, and Armstrong just about keeps a handle on what could have been a difficult tonal switch, and the end product is something quite special. 2020 may have been the wrong year to humanise a literally inhuman police officer but Survival Skills will stay with you long after the credits roll.