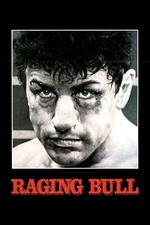 The most frightening thing about Jake LaMotta isn’t his rage. It’s that look in his eyes when he’s caught onto something, when he thinks he has somebody cornered. He latches on to a sentence, or a phrase, and then he repeats it over and over until it starts to take on a different meaning for everybody in the room. He makes himself believe things that aren’t true, perhaps because he wants these things to be true, because he wants to punish himself. But why?

"You ever think of anybody else when we're in bed?"

Raging Bull explores the classic Madonna-whore complex: a man falls in love with a woman, and as soon as he touches her, he realizes that other men can touch her too. Everybody gets jealous, especially in matters of love, but LaMotta is psychopathic in his cruel possessiveness over his wife, the way he hits her, the way he exacts his revenge on a young boxer she once casually called good-looking. That particular boxing sequence is chilling. It’s not the blood squirting from the poor young boxer’s face that’s truly violent; it’s the way Jake grins after getting him down, the way he smiles at his wife from inside the ring.

LaMotta’s life is a tragic one. He is irredeemably flawed, but he could’ve been a contender, if only his brother had looked out for him more. But that’s unfair too, because LaMotta’s brother tried his best. He encourages LaMotta's poisonous attitude toward women, but we oughtn’t kid ourselves into thinking that LaMotta wasn’t already a raging misogynist to begin with. That’s just part of who he is. He lusts after women, but he’s afraid of them. He is impotent in the worst possible way: he cannot believe that his wife can remain faithful to him, and so he competes against imaginary lovers, constantly trying to put a face to the supposed other man. He even begins to suspect his own brother. That’s an incredible low for anyone, even for Jake LaMotta.

It’s hard to believe that Raging Bull is about a real man. It’s a heartbreaking film, from the way LaMotta is always aching to get hit to the tragically funny Brando impersonation at the end. “Hit me,” he tells his brother at the beginning of the film. “Kiss me,” he pleads him at the end. The real LaMotta must really be something to be around. I wonder how he feels when he thinks about Raging Bull, if he is proud and grateful that his story has been immortalized, or if he feels a flush of shame when he thinks about the fact that the whole world has seen him at his lowest.

It’s redundant to talk about the technical prowess of Raging Bull, as it’s already evident in every shot, in every line of the film. Robert De Niro is astonishing. The way the film lingers upon flesh and blood, the crackling sexuality of the scenes between De Niro and Moriarty, the slow-mo shots, the way LaMotta’s story turns into an epic with the help of the black and white photography and serene classical music – it’s magical. It’s perfect.

Raging Bull is a sucker punch to the gut, the antithesis to every underdog story ever made. It's about an underdog who never gets to win, and it’s not because of the people around him; it’s because of his own destructiveness, his aching need to be punished for all his sins. Well, he got the punishment he wanted, all right. He’s still getting punished.