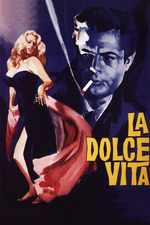 Slight spoilers in the last paragraph.

Our modern malaise is all-encompassing self-pity. I went through it last year: what was the point of wanting things if you were never going to get them anyway? In the throes of my self-absorbed sorrow, I didn’t notice that I had no ambition to begin with. Finding something to care about got me out of that horrible dark place, but every day, I come across more people my age – kids who haven’t even hit twenty yet, for fuck’s sake – diagnosed with depression, although nothing monumental has happened to them, to us. Why are you so unhappy? I don’t know.

Watching La Dolce Vita was like coming across yet another one of those depressed kids, or thinking about my own life a year ago – it fills me with both pity and anger, because it's only in retrospect that you can see that life is ugly only if you allow yourself to grow indifferent. And our protagonist Marcello has been indifferent for a very long time.

Marcello hasn't got any ambition, but he thinks he does. He’s a journalist with vague literary aspirations. Several times he’s asked how his book is coming along, and he always waves away the question, somewhat irritated to be reminded of his higher aspirations. He grows increasingly disgusted with the people he’s surrounded by, but it’s not like he’s very different from any of them. Everyone is impeccably dressed, everyone is drinking and laughing and talking, and nobody is happy.

Marcello has a girlfriend, Emma, who proclaims that Marcello has the most important thing in the world – love – but her clinging, suffocating form of dependence is the farthest thing from love. It’s helpless selfishness, though evidently it used to be something different back when Marcello himself was different. He probably used to be one of those wide-eyed writers with bad haircuts, burning with ambition and the desire to prove himself. He’s quite different now – suave, handsome, perfect hair – and he isn’t exactly insecure, but he’s hungry for something else now, something he can’t define. None of us can define it. If we could, we probably wouldn’t be this way.

But why are we like this? We chase after famous people, we make idols out of vapid celebrities, and always, always apologize for things that aren’t our fault. We want to accept everybody, to make everyone feel welcome, and in the process, we lose sight of ourselves. The world of La Dolce Vita is one of extreme decadence, which we don’t often come across ourselves, but we all engage in empty intellectualism and shallow talk and casual approaches to relationships. Marcello’s world glitters a lot more than ours does, that’s all.

La Dolce Vita is episodic in nature, a string of loosely connected vignettes that build upon the inner emptiness and alienation of Marcello's world, though some of the moments that make up these vignettes are often funny and unexpectedly touching. Mostly, though, they get increasingly bleak. And the final portion of La Dolce Vita, the one in which Marcello Mastroianni sits on the beach in front of the enormous carcass of a shark, is full of deep-seated disgust.

Over the course of the last week, Marcello has kept company with people from every walk of life: with a celebrity and her posse; with Steiner, a married man with a beautiful home who keeps company with the brightest intellectuals; with Paparazzo and the hyenas; with his father; with the old rich; and finally, with people like himself: selfish, shallow wannabes who have no idea what they want out of life. It’s no wonder that Marcello finally goes a little crazy; he doesn’t like anybody he keeps company with. But far before all that happens, it was already obvious that nothing makes Marcello happy.

When you don’t know what you want, life becomes frighteningly empty. All of La Dolce Vita consists of Marcello coming slowly to terms with the aimlessness of his existence. But when he waves goodbye to the young girl at the beach, he doesn’t leave the party; he trails after them until one of the partygoers comes and takes his hand. He’s not going to extricate himself from this life anytime soon. He knows that his life and his future are horribly uncertain, but right now he’d rather just forget about it all and continue to pretend that he’s better than the people he keeps company with. And we understand. Oh, how we understand.