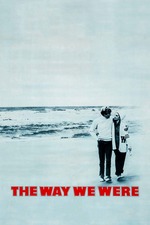 The Way We Were

Barbra Streisand and Robert Redford have a go at being in love even in the face of their radically opposing personality types and hair textures.

After spending their college years performatively concealing their boners for one another (and looking approximately 43 years old), Katie "Engels is my homeboy" Morosky and Hubbell "I’m not like other jocks” Gardiner are re-united as grown-ups towards the end of WWII and boy, is she happy to see him! Despite Katie being super intense and a total buzzkill almost constantly, she wins Hubbell's heart and they embark upon a love affair.

After hitting some teething probs early on, Hubbs and Katie make an unspoken agreement to ignore their blatant incompatiblity and continue to bang out their respective fetishisations for the foreseeable future which absolutely seems like the best approach, mmhmm, definitely.

Hubbell's successful transition from all-american hero to all-american... screenwriter sees the couple relocate to Hollywood, baby, for some sun, sex & rampant McCarthyism. Here, their relationship faces further strain, almost as though it were doomed from the start...

I really enjoyed this film, I felt that Streisand & Redford had a real sexy chemistry going on so it was fun to see their attraction unfold. In a move that surprised no-one, Streisand's portrayal of a lovesick Marxist is fascinatingly melodramatic. I mean, I'm a highly-strung loud mouth with a big nose so I feel a connection to her energy but even I was like "wow okay Babs, cool your jets, have a sit down", but I found her absolutely charming nevertheless and I couldn't imagine anyone executing that character as endearingly. To be honest I could watch Barbra Streisand butter bread and I'd still be like "THE DRAMA".

Overall, I can see why Carrie fucking Bradshaw identifies with this movie, but it was still an enjoyable jaunt and for those wondering, yes I was extremely into Robert Redford throughout because I fancy anyone that looks like they would've bullied me at school. This is my safe space, please allow me to work out some things with you all.

The Secret of NIMH