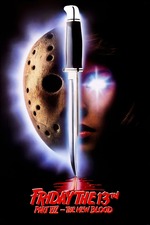 One of the first Friday the 13th sequels truly able to stand on its own, The New Blood brings us back to Crystal Lake with some of the best characters the franchise had ever seen.

Lar Park-Lincoln was such a brilliant final girl, and considering Jason's zombie status and the fact that she was at an unstable power point with her telekinesis, she was one of the strongest. Terry Kiser also did an amazing job with his side antagonist role as the corrupt psychiatrist, and the cast as a whole was really fun to watch.

It's very clear that this was the point where Paramount just let them have fun, because the energy from here on out was very different from that of the Jarvis trilogy and the films before it. This really doesn't deserve that low of an average rating.