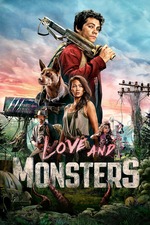 After a brief, but rather obnoxious, narrated introduction, Love and Monsters settles into being a well executed and very tropey apocalypse movie. It ticks all the YA and post-apocalyptic boxes you would expect, going every direction you think at will – with even later twists on the formula feeling inevitable. But, when a film gives you familiar stuff done right, it works as good comfort food – especially when it is as charming as Love and Monsters.

It’s a familiar tale, a disaster sends the world into an apocalyptic state that pushes the humans underground. Here, the apocalypse is mutating creatures that slowly morph into human slaying monsters – that kill 95% of humanity. We pick up several years later in one of many survival bunkers, known as colonies, where our hero Joel (a charming Dylan O’Brien) does menial jobs – as he doesn’t have the aptitude for hunting or survival. A radio broadcast from a figure from his past, a person he presumed he would never see again – but always hoped to, sends him on a self defined mission to seek them out. This means heading out into monster territory, alone, and facing the dangers that come with that. It is pulpy stuff but it is fun stuff.

The film’s real highlight, though, is the visual design. The overall aesthetic of the world is a pretty standard stuff, in fact the whole premise and design seems cribbed from a small selection of notable video games (Fallout, The Last of Us, Borderlands – even Monster Hunter) but it still looks nice. There’s a brightness and colour to the world which matches the light hearted tone of the film. This is a fun film. It has digressions into emotional moments but even these are light and their predictability makes them almost cute – even when they should be traumatic. However, when it comes to the titular monsters, this film really delivers.

The monsters are in the title for a reason, because they are the star of the show. There is an amazing assortment of creative creatures that all look pretty spectacular. As visual effects, they are quite remarkable. You can see elements that will inevitably age but the way the creatures move, and small details, mean that it will always look striking. The real appeal is the overall art design though, the actual look of each creature is so cool that – even when the tech of the future makes this look as fake as older effects movies do to us now – this will still be a looker. The monsters are a great balance of grotesque and adorable. They look like monsters but there is a spark to them, a real aesthetic flair. Again, the wide variety also helps – as do the fun set pieces built around the beasts. When monsters strike, the film gets really fun. It is never anything special but it is very creative.

Overall, this is a perfectly enjoyable film that does everything you expect it to. And, you know what? Sometimes that’s more than enough. Everything it attempts is conceptually good, though familiar, and it pulls it all off. There is some silliness and you will frequently need to suspend your disbelief about certain plot points, character continuity or the way the world goes. But this is all part of the mindless charm. Let the film wash over you, enjoy its quirky but ultimately charming energy and fall in love with those monsters.