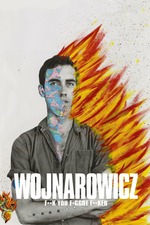 So many films about pre-Giuliani NYC have bypassed or even glamorized the suffering that went along with its thriving music and art scene. WOJNAROWICZ brings back its politics and reminds us of the many tragedies caused by AIDS. Take the shots of a 1989 ACT-UP rally where people chant "Health care is a human right!" Well, America's still going through another plague in which the government shoveled minorities into the furnace and refused to effectively educate its citizens about how to behave safely. Nor does our current president act like health care is a human right, more than 30 years later.

Making a documentary about an artist who died in 1992 which feels this vital must've been difficult. It helps that Wojnarowicz left so many recordings of his voice and that he wrote and spoke so eloquently about his struggles. WOJNAROWICZ draws heavily on them, laying audio recordings of friends like Fran Lebowitz and art critic Carlo McCormick over a busy montage. (I'd never heard Wojnarowicz's rock band 3 Teens Kill 4, whose use of spoken word samples and cheap drum machines recalls 1980-era Cabaret Voltaire, before this film, but I can hear their collage aesthetic as a precursor to his paintings.) Avoiding the temptation to rely on talking heads interviews, its cut-and-paste approach draws on that of Wojnarowicz.

One in a Thousand