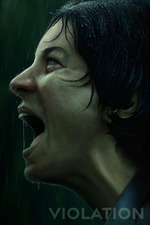 Committed to unpleasantness and denying the rewards of genre entertainment as a political act while removing any catharsis from violence, this actually deserves the hype PROMISING YOUNG WOMAN is receiving. It's a far grimmer riff on the rape-revenge/vigilante narrative (it also riffs on "cabin in the woods" tropes), willing to show its protagonist Miriam (co-director/co-writer Madeleine Sims-Fewer) continuing the abuse of power she's suffered from rather than dreaming up an elaborate revenge plot whose messiness somehow stops short of real violence. Lars von Trier's ANTICHRIST is an obvious influence, as well as FUNNY GAMES and the New French Extremity. VIOLATION succumbs to a few arthouse/"elevated horror cliches": a score consisting of ominously churning strings, murky lighting and cinematography. Also, out of the four main characters, Miriam's husband Caleb (Obi Abili) is a cipher; the others seem pretty nasty, but at least they have real personalities. But it's not the work of an edgelord or an exploitation filmmaker. It avoids piling on onscreen rape scenes to try and shock the audience, although it does include these images. Sims-Frewer committed to bringing out her character's pain so much that she genuinely threw up for 90 seconds onscreen. And as a writer, her script ably balances long, tense silences and intense one-on-one dialogue. Not one bit pleasurable to watch, but well-crafted and extremely powerful.

The Half of It