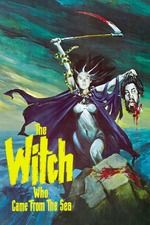 Grim, unpleasant and ugly-looking - full of crude edits between Molly's (Millie Perkins) violent fantasies and dreary reality - in a very '70s way. Written and directed by men, THE WITCH WHO CAME FROM THE SEA sympathizes with female victims of sexual abuse while also expressing a very male fear that they'll turn to murder as a result. (It contains one shot of an adult man on top of a child he's molesting that would never fly in 2021,) Perkins is convincing as a woman pushed to the edge, using alcohol, pills, TV and sex to numb herself enough to get through life. Although set in Venice Beach, the film's close enough to L.A. that Molly can hang out and sleep with washed-up movie stars, yet her dead-end world of low-paying jobs as a waitress is completely devoid of Hollywood glamour. Her ability to sleep around is post-'60s, but idealistic notions about sexual liberation have just curdled into an excuse for men to exploit women sexually. AUDITION improved on this basic scenario, but THE WITCH WHO CAME FROM THE SEA feels authentically grubby in a manner that's so rare in contemporary horror movies.