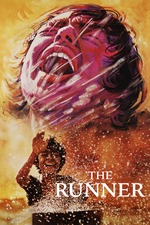 The images of poor children in Amir Naderi's THE RUNNER can be traced back to Rossellini and De Sica. But where Italian neo-realism was a response to WW2, the Iranian version, at least here, depicted some of the fallout of Iran's lengthy war with Iraq. Amiro (Majid Niroumand) is a boy orphaned in that war, living in a seaside resort town alongside many similarly homeless kids. The film begins with a somewhat grubby look, starting off in a garbage dump. There's fairly little dialogue, and Naderi favors long shots. It avoids poverty-porn by putting Amiro's relentless energy and drive, which eventually turns into a pursuit of education (he's illiterate), at center stage. The images grow more and more primal and iconic, turning from dusty earth to ice, water and fire. Please show more of Naderi's Iranian films, cinephobe.tv!