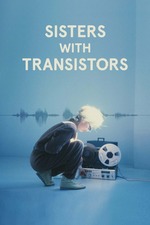 Lisa Rovner’s documentary “Sisters with Transistors” argues that technological innovation stemmed from women’s exclusion from conventional musical fields. If electronic music wasn’t considered “real music” (and, often, still isn’t), why not compose and produce music from pitch-shifted tape loops of field recordings rather than competing in a game whose rules would never allow a female pianist to be recognized as a virtuoso, no matter how talented she was?

At only 84 minutes, “Sisters with Transistors” is a brief introduction to a subject that deserves a much longer treatment. (The tendency to blow up documentaries into docu-series for streaming services has rarely served them, but this might have been better as a more comprehensive TV series spanning three hour-long parts.) As such, it feels contradictory and hesitant at times. Laurie Anderson narrates the film, and contemporary women making electronic music are heard, but they don’t get to talk about their own music. But it's an essential look at how women shaped the music and technology we listen to and use now while men swooped in and took over once it became popular.