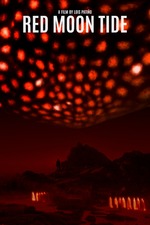 The last 15 minutes are among the most stunningly beautiful cinema I've seen this year, with director Lois Patiño creating breathtaking compositions combining white costumes and bright red cinematography. RED MOON TIDE moves in a direction which I'm surprised more films haven't taken, bringing together slow cinema and cosmic horror. (It's a Grasshopper Film/Cinema Guild, rather than A24, version of "elevated horror." Not that any of these distributors have acquired it for US release.) Starting out in a familiar festival cinema mode, with long shots in which image and sound rarely connect, Patiño always shows a real eye. He makes his choice of shots mean something: the camera's extreme distance from people conveys the worldview of a monster that doesn't care about us. RED MOON TIDE is full of mysterious, painterly images, like a tracking shot across a road showing a herd of animals racing through a field. But it's surprising that Patiño has an answer to the film's mystery.