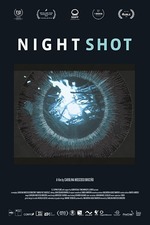 With NIGHT SHOT, Carolina Mososco dives head-first into a number of taboos, especially the idea that a rape survivor should treat their experience as a shameful, private event. But her personal documentary is also equally concerned with finding a language adequate to living with sexual assault. At first, the aesthetic of NIGHT SHOT is bare-bones. Until about an hour in, none of the images she shot allude to rape, but her experience of the violation itself and her dreadful attempts to get decent health care and justice through the law are told via intertitles. In the beginning, these alternate with home video-style shots of vacation trips and images of Mososco and her friends hanging out, cooking, and making music and other forms of art. That benign spirit makes the starkness of a line of text across black screen saying something like "I was scared of having AIDS" all the more powerful. But Mososco's filmmaking gradually becomes more ambitious, without entirely departing from the home movie vibe. The film's color palette expands greatly. And without ever feeling like #metoo bandwagon-jumping, it suggests that the director stopped thinking of her assault as a private matter and started participating in public protest, with NIGHT SHOT conceived as a way of reaching out.

The Prize of Peril