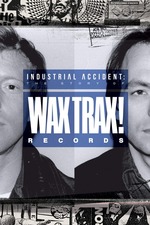 As filmmaking, this is a basic and uninspired loop of talking heads (although at least all of them have a connection to Wax Trax; director Julia Nash did not film random celebrities enthusing about Ministry and Front 242.) But it tells a compelling story I did not know before. I wound up watching INDUSTRIAL ACCIDENT at the end of a day where I saw a Laibach concert on YouTube and listened to KMFDM's debut album for the first time, so it seemed like the only logical conclusion. The record store and, eventually, label were founded by an openly gay couple back in the early '70s. When Steve Albini says that in Chicago, punks would go to dance clubs to relax, I can suddenly see the birth of the label's signature version of industrial music, which was essentially rock music made with electronics. (When I first heard the term on mid '80s college radio, it was applied both to Einsturzende Neubauten smashing metal and Cabaret Voltaire's dark dance bangers.) The label defined a sound that would go on to fill arenas - Ministry's deal with Sire paid for the many Al Jourgensen side projects Wax Trax released, even though they never actually released a Ministry album - but that success proved its undoing, since they didn't sign contracts with any of their artists or have a legal right to their own back catalogue. And at the label's peak, co-founder Jim Nash came down with AIDS. It's a tragedy on several levels: major labels leeching off a subculture and poaching its most popular artists, AIDS killing off creative gay men.