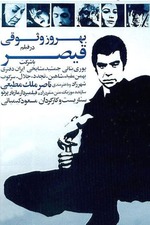 The political subtext of director Masoud Kimiai's THE DEER is much more understated in this tale of the title character's (Behroz Vossoughi, who would go on to star in THE DEER too) revenge of the men who raped his sister, leading her to take her own life. It's a brooding, macho B-movie of its time, pulpy in a way that I've rarely seen in Iranian cinema but which feels close to Donald Siegel or Sam Fuller. Kimiai pays homage to the shower scene from PSYCHO and cross-cuts between Gheisar killing a man and a cow being slaughtered. His second film, this proved to be his breakthrough, and it really shows off his ability as a director. Vossoughi exudes movie star charisma in a role far different from the worn-out addict he played in THE DEER. BTW, the version currently streamed on rarefilmm looks very clear, with quite readable (if somewhat awkwardly translated) subtitles.