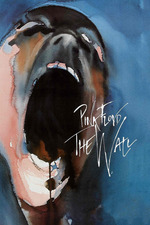 "Contains higher levels of bob [as in not bob geldof, other kind of bob] than anticipated, horrific and impressive body horror animated segments, somewhat enjoyable when viewed as one big long music video rather than as a conventional narrative, 3.5 stars. I think it is a great compliment to the album like in an album art sense, but as a standalone movie it is a bit confusing and vague but I sorta love that too. I felt like it was very unpredictable which is refreshing. Did have some impressive shot compositions too. The WW1 stuff looked great. I'd say it was a very ambitious music video but you wouldn't really watch it for the plot primarily although it does follow the album fairly well and kinda reflects the themes of madness by making the film very disjointed and wild. Kinda has the whole surrealist thing going on. Might reward repeat viewings, I definitely loved the animated segments the most. But at the same time I'd say just listening to The Wall by itself is the superior way to experience the album, imagination always paints a better picture than film ever can. The Trial looked a lot more impressive in my head and didn't involve a giant fkn talking anus although I can appreciate the creativity."

i (katty) can't begin to form words on this film,, it is just,, pure deep fried brain torment,, definitely the superior way to experience the wall is through merely listening to the album, as ronan said