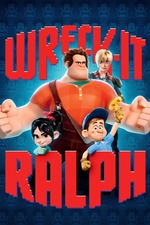 This movie is all over the place. It starts in Fix-It-Felix Jr. where it's Ralph's job to tear shit up. It's a quirky little game which sets up the whole narrative of Ralph being the misunderstood bad guy. It's actually set in an arcade full of games. Connected with a surge protector. The possibilities are endless and everyone at Disney involved realized this.

John C. Reilly is such an expressive voice actor. He gives such a depth to this otherwise cut-and-dry character. His heart comes through the microphone and he ends up making a very likeable character. The problem is the thing just wants more. They pack so many throwbacks and inside jokes into this I have to imagine the younger audience this is intended for is going to be asking a lot of questions. I fortunately didn't have to explain anything so I was just left trying to piece this one together by myself. It's hard to reconcile or like a movie that moves around so quickly. As soon as it establishes something I get interested in, it deserts it. It's like being forced to switch games after just one level. You don't get that cohesive flow that could make a great movie.

This is just a matter of too many bullet points on the white board. Instead of erasing a few they decided to put them all into this one. It becomes a game in itself trying to call out the schtick before it happens. I really liked parts of this. As a whole it feels unfocused. But let me emphasize, it does a lot of things really well. There's a ton of originality in this, sometimes it manages to obtain that early Pixar level of brilliance. But there's just too much here to handle.

It's an overdose. I feel like I ate too much candy and now I'm crashing hard...I'm going to sleep.