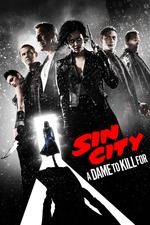 Sin City: A Dame to Kill For

I'm fairly sure Robert Rodriguez took a blow to the head sometime between the first and second movies in the Sin City universe...At least that's my hope.

Because this is some Grade-D filmmaking. Everything I hated about Frank Miller's The Spirit is present in this movie as well. It is way overwritten and just chock full of jokes that don't land. It's almost a parody of the first Sin City. Remember how cool the first movie was? This is like Rodriguez watched the first one on DVD and tried to replicate that cool factor. Except it doesn't come off as being cool at all.

It comes off as trying hard to emulate the same magic the first movie had but doesn't have any magic of it's own. Where the first movie was super original and creative, this movie just seems to be taking the same steps but with no direction. There were many scenes that were just simply laughably bad. Frank Miller has clearly lost his edge when it comes to writing that sort of badass noir prose that he was known for. And where the first movie has visually innovative, again this movie is just a carbon. There's nothing that makes it better than the first and a couple parts that make it look worse. I counted two shots that really looked great.

But Bruce Willis does come back and reprises his role from the Sixth Sense...So there's that.