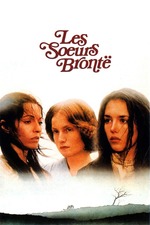 a combination of people that I put in high regard and it seems to me a dream come true but sadly this is kinda dull not because the Brontës' lives are bleak per se but because this adaptation tries too hard to be poetic and to mirror the Gothic setting in the sisters' novels. it also has a habit of hinting on things instead of directly depicting them which is nice but is done excessively. also, it feels so weird to hear them talk in french and then say they don't speak french that well. I laughed quite a bit. Charlotte is very strange (I know she's strange but here she's ten times stranger than I thought. she sometimes looks displaced). furthermore, the title is a misnomer as it focuses more on Branwell as a failed genius; more than half the runtime the three sisters' lives revolve around him whilst only touching ever so slightly on the three sisters' talents. and when it does touch on the Brontës' published books it goes too quickly and then they die one by one. I know that's what really happened and this adaptation is pretty accurate (it probably is the most accurate) but I would love to see the Brontës as kids, a flashback maybe, creating their fictional worlds and writing their very first stories and somehow a peek on their creative process. the Brontës' novels especially The Tenant at Wildfell Hall and Jane Eyre are one of the first novels to have feminist themes. I'm probably asking too much but I'm thankful it does portray the struggle of women to get published and mention the mysterious Emily's beautiful poems. more people should read them. I've always felt like they're underrated and is overshadowed by her only novel Wuthering Heights. overall this doesn't add much with the details in their wiki pages but it's still nice to see their lives on screen. I've always wished they all lived longer, we would probably have more classics. before I forgot, this also ends abruptly. a downer I must say.

IN SUMMARY: too much Branwell, too little Emily (yeah I know we don't know a lot about Emily but let me be). and Isabelle is perfect as Anne.