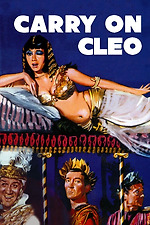 Carry On Cleo is one of the very best Carry On films, secondly only to Carry On Screaming in my personal ranking of the series. Carry On Cleo is when the series really hit it's stride. This was the era which saw the series making fun of other film genres. Carry On Cleo playfully lampoons the 1963 behemoth Cleopatra and even makes use of some of the sets and costumes from the "epic" Elizabeth Taylor film. Carry On Cleo has one of the strongest plots of the series. Its a tone of fun with many memorable scenes and jokes. The attempt on Caesar's life is one of my personal highlights. The film also features many of the regulars on top form as well as some new faces. Kenneth Williams is a particular delight in this film as cinema's campest Julius Caesar. Gerald Thomas's direction is some of his strongest, with brilliantly staged slapstick and a rapid fire pace.

Overall, Carry On Cleo is one of the highlights of the Carry On series. It showcases the cast and production team at the peak of their powers. There are one or two quibbles but they do not hinder the film. Carry On Cleo is a film that I love coming back to and is a complete joy from start to finish. Highly recommended!