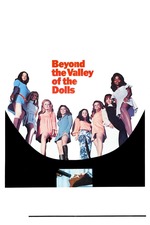 It’s late-stage hippie kitsch with satire only Roger Ebert could devise. It’s a colorful, smart takedown of “Valley of the Dolls,” a film I admit I didn’t see before this, with all the gratuitous nudity and beheadings you’d want. It’s a trailblazer, with admittedly problematic attempts to get gay characters into the film.

Still, while it’ll take some suspension of 21st century sensibilities, it’s still a great film and worth at least one more viewing.