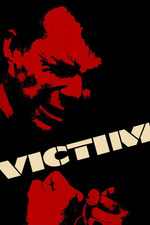 "I have seen this cities true face...someone is picking off costumed gays. Boy Barrett died tonight and no one cares but me."

The fact that this is on the surface a very non flashy, uncinematic film (dare I say STRAIGHT laced) only seems to enhance the intrigue surrounding the secret London Gay world we only get glimpses of in these characters dreamy ruminations, winks, and nods. It almost feels like these characters are hiding in a clinical black and white film, retreating from headier days of technicolor love. They cant hide for long. Something wicked this way comes: BLACKMAIL! Even the villain is not who he appears (adore the subtly that's going on with that character)

Its an odd thriller (dare I even say a QUEER one) The sleepy daytime soap opera of it all is punctuated by big loud music swells BUM BUM BUM like out of a cops and robbers mystery only here, these moments have little to do with gunplay or espionage, these crescendos come at seemingly small moments that point to "the secret world" of these characters and the consequences that come with it. Its a juxtaposition that I find intoxicating and a story that, while dated and tabloid...ed, feels emotional and urgent.

The cops operate in this film feeling like a bizarre order of dutiful knights who "have no feelings" and are simply honor bound to dish out the law like any good Englishman would do (right? lol). The film seems confused (interestingly so) permitting us to, in one moment, be (for the time at least) radically sympathizing with the trials of blackmailed gay men, and then the next minute it feels like we are supposed to have been seeing this from the cops perspective which in this case means hearing these poor fellows out offering a hanky but of course having to do what is right for king and country. Its dated, sure, but schizoid in a way that is interesting and reflects the way much of the straight world to this still sees such matters.