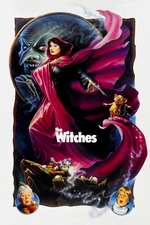 When I was like 12 my uncle described the scene where the witches take their hair off and that was enough to keep me both mystified and traumatized at the prospect of watching this movie. I felt further confusion when I found plot points and stills in the Henson books I would read. Henson was and remains a fatherly, almost spiritual figure to me personally, so I felt I had to see it one day. In the meantime I pieced together, in my head, my own versions of what terrors I believed awaited me and continually freaked myself out.

Having just now finally watched the "witches taking their hair off" scene I can say it was absolutely more horrific and creeptastic than my 12 year old brain ever imagined. You win Henson and company! Love how mean and true to Roald Dahls aesthetic this is, feels like it must have informed the adaptation of Matilda that we would get soon after.

I am a big Roeg fan and despite this being a bonkers movie, with a delightfully unamerican delivery, its not that kind of bonkers. They must have had him leashed and muzzled during the filming and editing of this movie (hot).

(speaking of hot) I really cant help but admit that Angelica Huston as the grand Witch in this movie, is one of the most gorgeous and intense humans I have ever encountered. She evokes an almost androgynous power in every scene she steals. Effin icon. She would look at my text: "i kno im younger but like, we could like do somethin sometime if u like wanted to but like no pressure lol" roll her eyes, and then return to her business with other older lesbian doms, Punishing fat businessmen in a cool castle dungeon...(or at least thats how my dumb dream of the scenario goes). sorry. anyway...

biggest complaint: WISH THE MOUSE KID WHO CAN ONLY SAY THE WORD "GRANDMA" WOULD SHUT THE HELL UP although, grandma is probably the first person id yell for if I was turned into a rat tomorrow so...
ALSO Roeg apparently cut out six scenes his son thought were too scary (DIRECTORS CUT PLEASE)
ALSO ALSO: HUGE RIP this was the final film master Jim Henson worked on. Hail Jim!