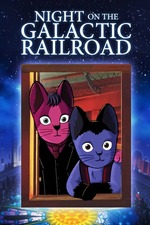 Ugg what do you say about this one?? Lets give it a try...
This story of two probably/definitely gay cats on a train ride through space/the afterlife(?) remains one of the most underrated animated epics of all time. It truly feels like an artifact from some alternate timeline, more of a place to disappear to than a simple movie. It is baffling in the way that it embraces dream logic but remains absolutely tender and charged with powerful emotion.

It fills me personally with a strange deja vu. It calls back charged and magical memories that get harder and harder to recall as the years fly out the window...a first crush, a first loss, a first break up, a first day of school. Maybe being lost? Maybe just that wide eyed feeling of wonder we had as a kids being pushed around in a shopping kart, mesmerized by every mundane detail of the widening world around us. These are moments of strange clarity, where things become all too lucid and raw.

The first part feels like the first level of an rpg where youre running around doing odd tasks around town and chatting with villagers...then comes the rest...spaced out and almost dread inducing with no Miasaki high fantasy context to give relief. Despite its surreal leanings it retains that wide eyed (so many wide eyed staring contests in this movie) rawness, that unspeakable something that is...well...unspeakable...shit I knew this one would be impossible to write about...Just watch it.

PS when theaters are a thing again (COVID times) pleez sign me up for a double feature where a showing of this is followed by Angels Egg. Afterwards we would most certainly exit the theater to find our feet carrying us up into the air toward the great blackness beyond with our eyes wide and bulging like the dreamy gay cats we are.