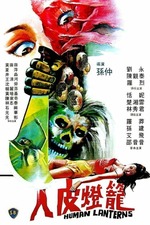 A dazzling fantastical kung fu fantasy full of glowing gore. At the end of the day, the sexual violence is a bit much for me personally, and will probably make me not want to return for the foreseeable future, but that being said, it is indeed a feat of tantalizing color and inhuman choreography. The crafty villain Sasquatch/Skullsquatch is both my favorite part and the source of my previously mentioned issues. He looks like Chewbacca flipping through the air which is of course something any sane person would want, and plot of him using HUMAN SKIN to make lanterns is some wild ass Edgar Alan Poe shit that I am more than down for.

Its one of those movies that has to have at least two colored lights in every shot and its absolutely the right decision! Hell yeah! Also I love that weird half fish eye lens they use throughout...
So again, an immaculately well crafted film that oozes with color and action...and yeah, while it maybe frames some of the events a little too theatrically for comfort, sure, I guess its not like the film is portraying the deeds of this twisted Sasquatch, rapist, gore arts and crafts monster as the right way to be...its just a bit rough at times.
You look great but,
Fuck you Skullsquatch!