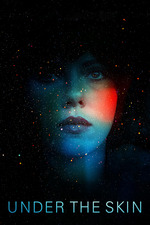 Quick thoughts: I hate to bandy about the 'M' word but this really does feel like the first masterpiece I've seen this year. It really is like nothing else I've ever seen; the cinema verite of the scenes in the white van (oh how I loved the subversion of making a succubus' mode of transportation so decidedly unsexy - and the car most associated with dodgy men) is of such stark contrast with the creepy and surreal seduction scenes and yet tonally the film is totally coherent and consistent. The music in this film is nothing short of astonishing, recalling The Shining in both the actual sound design and the transformative effect it has on the mood of the piece as a whole. I haven't read the original text but I loved the film's sparsity, and yet despite the lack of exposition and plot-related detail there's so much to unpack in terms of what I think Glazer is getting at in a wider context. He touches on beauty, femininity and masculinity, empathy, fear and ultimately what it means to be human. Or not human.

Also Scarlett Johansson is brilliant and the best female lead I've seen in absolutely ages. Her first not-shit film since Lost in Translation (her second since Ghost World).

TLDR; Jonathan Glazer's singular vision is gloriously unsettling and feels fully realised. I really do think those that have seen this film won't be forgetting it any time soon.