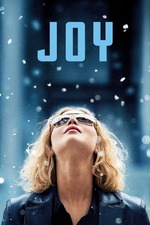 Not a review obviously but a few quick thoughts that I couldn't squash into a pithy tweet:

I'm no fan of David O. Russell (The Fighter: forgettable; Silver Linings Playbook: embarrassing but made watchable by Cooper and Lawrence; American Hustle: unbearable). In general, I find his camerawork chaotic and rhythmless, his plotting incoherent, his pacing baggy, his attempts at screwball patter grating, his music cues so on the nose that they make me physically cringe.

But I wanted to like this one. After all, everyone else seemed to. Sadly, I found it extremely dull and middle-of-the-road. All of the exposition is in the mechanical, laboured dialogue. The voiceover/framing device is convenient but clunky. The supporting characters are woefully underdeveloped and cartoonishly one-dimensional, from her soap-opera obsessed mum to her shrewish half-sister. If David O. Russell spent as much time developing his characters and creating legitimate stakes as he did explaining the minutiae of mop-making (ok, we get it, 300 loops of cotton, JFC), he might have something interesting on his hands.

Richard Brody describes O. Russell as having a tendency "toward megawatt displays of personality that are actually impersonal." This is the most succinct way of describing Joy. Jennifer Lawrence brings a charisma and a specificity to "Joy", and O. Russell encourages us to interpolate her, mediating the character through her stardom. Thing is, beyond Lawrence's performance, there's very little about "Joy" that feels real or specific or lived or "daring" (ugh). The "daring" is her willingness to take fiscal risks - risks that we know were worthwhile because Joy ends up wearing a power suit in her nice house at the end of the film. But this risk doesn't necessarily demonstrate business acumen so much as it does common sense that inevitably looks impressive against the incompetence and duplicity of everyone around her.

Is that the point? That women are constantly surrounded by incompetent men, and have to invent ways to survive? Maybe I'm not giving it enough credit. In the film's final act, her father tells her that she shouldn't have been allowed to act on her ideas. Not a word of this speech rings true. She cries but I don't buy that she believes what he's saying - or that he means it. It doesn't work as melodrama for me; the emotion isn't in excess, it's shrill and calculated and feels situational rather than existential. As far as emotional climaxes go, it a thin epiphany, and an incredibly a blunt way to move the plot along.

The (conservative) idea that any individual with the right attitude can "common sense" their way out of financial ruin seems to be at the heart of this film. It's not about female liberation specifically (which is why the "inspired by daring women" feels like marketing jargon).

There are two reviews of this film that I like: Tasha Robinson's, who seems to have many of the same problems with the movie as I do, and Allison Wilmore's, which talks about how the film is built on the "gif-ableness" of Jennifer Lawrence's stardom (and to be fair, her performance is excellent and the reason why many will enjoy the film).