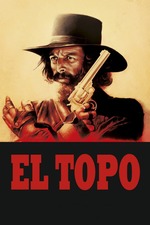 I'm not entirely sure what I get out of El Topo, to be quite honest. It's a film that always leaves a nasty taste in my mouth, not least of all because of the consistent animal cruelty and ritualistic bloodletting, but because of the unsettlingly mercurial nature of Jodorowsky in the lead role. At once a self-critique as a director and an egotistical headtrip as a saviour, he is at once the father, the son and the holy ghost, navigating an endless universe of spirituality and brutality. It's thorny, it's problematic, it's deliberately inconsistent and difficult to assess as anything other than a cult artefact or narcissistic manifesto, and it somehow pulls it all off by just being one of the best films of the 70s. I don't make the rules, Jodorowsky does.