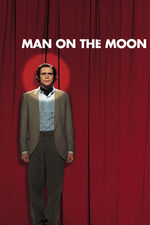 Jim Carrey stars as cult entertainer Andy Kaufman in this biographical comedy-drama about his life, directed by Miloš Foreman from a script by Scott Alexander and Larry Karaszewski, with Danny DeVito, Courtney Love and Paul Giamatti in supporting roles.

Carrey manages to completely disappear into the role, and gives an amazing performance that came from never breaking character on set, spot on in capturing the mannerisms and personality of his comedy hero. The film is a great look at Kaufman and his elaborate practical jokes, with Alexander and Karaszewski once again exploring the life of an offbeat and unconventional figure after Ed Wood and The People vs Larry Flynt.

Many people from the time play themselves, including wrestler Jerry Lawler (who Kaufman had a long-running “feud” with), his Taxi co-stars including Judd Hirsch and Christopher Lloyd, then Late Night host David Letterman and SNL producer Lorne Michaels, all adding a sense of realism to the story, although they’re all twenty years older than they would have been.

It’s more of a homage to Kaufman than an out-an-out biography, with lots of embellishments to the story, but I think that reflects his own love of subverting expectations and hoodwinking people, as myths about his life are added to the story. However, I don’t think the film delves deep enough, Kaufman always shown from a distance and  through the perspective of others. It’s never quite got a grasp of him as a person, unsure of how to portray him, moving between naive and unlikeable.

We see his publicity stunts, but because there isn’t much focus on his personal life in the middle of the film it starts to drag as there’s not enough substance to back these scenes up, which a feel a little tedious as a result. When towards the end it stars to explore his private life the film picks up, becoming quite touching and managing to balance the public and personal much more, but the story as a whole feels too much like a standard biopic to truly get to the heart of the subject.

Man in the Moon works best when it focuses on the man instead of the public figure, and could have gone a little further in exploring what made him tick, Kaufman’s true character remaining elusive despite the best efforts of the makers, although perhaps that’s the way he would have wanted it.