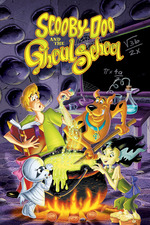 This is about to be so nerdy so I apologize in advance. The three film run of direct to video Scooby-Doo movies in the late-80s (Boo Brothers, this, and Reluctant Werewolf) aren't exactly close in quality to the Mook Animation entries a decade later, with Zombie Island arguably being the pinnacle of any Scooby-Doo movie, but they're certainly better than the entries in the mid 2000s that fell into a repeating cycle of boring villains and locales. At the very least, Ghoul School has a decent understanding of horror atmosphere, and Scrappy isn't nearly as unbearable as usual. The animation here isn't quite as bad as 'The New Scooby and Scrappy-Doo Show', but it's still pretty terrible. So many clumsy frozen frames and sloppy repeated backgrounds. Not that Scooby-Doo is known for stunning animation anyways - Ghoul School still is somehow cheaper than other Scooby-Doo incarnations. But I've seen the nadir of this stupid kids series, the absolute bottom of the barrel, and it isn't this. Plenty of charm to be had.