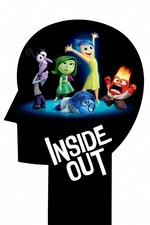 At one point, this film felt so truthful and achingly arresting that I wanted to reach out and become one with the screen. Being in a darkened theatre wasn't enough, I wanted to live within the realm of tenderness and majesty that Inside Out radiated. Pixar has just stolen my heart and opened a door to another world in a way that showcases the limitless possibilities of cinema.

Pete Docter's Inside Out is a masterpiece. Visually scrumptious, wonderfully conceptual, brilliantly crafted, and heartbreakingly emotional; Pixar's latest film is their finest outing and a masterclass in supremely detailed storytelling.

With a story beginning from the minds of Pete Docter and Ronaldo Del Carmen (who is also co-director), Inside Out consists of a journey that is both intimately grounded and structurally massive. Following the story of five emotions inside the mind of a 11-year-old girl named Riley, Inside Out is a breathtaking tale of memory and nostalgia, focusing on the five emotions and Riley in an interweaving structure that bursts with inventive magic and fascinating visuals.

In spite of each emotion sporting a particular feeling (Sadness, Fear, Disgust, Anger, Joy) throughout the film, each of them are beautifully multi-layered and tragically honest. Pixar lets every character flourish in natural and surprising ways, committing to the insanity of the entire project that allows for an incredible consistency in regards to character. Simply put, every individual in this is as memorable and indelible as can be.

The animation is magnificent. If I could go up and shake the hand of every Pixar animator, sketch artist, and designer, I would. The world of Inside Out is splendid and beyond colorful, moving through fantastical locations that gush with iconic images and sensational concepts. Every second of film brought another surprise, another joke, another revelation; It all comes together in a fluid and spellbinding fashion.

Every voice actor in this perfectly compliments the immaculate animation on screen. Amy Poehler, Phyllis Smith, Bill Hader, Lewis Black, and Mindy Kaling are all spectacular, each of them embodying their respective emotion with vibrant hilarity and subtle poignancy. Hell, even Diane Lane and Kyle MacLachlan are in this, bringing terrifically tender performances as Riley's (Kaitlyn Dias) parents. It's an all-star cast through and through, showcasing tremendous talent within each and every line.

The screenplay by Pete Docter, Josh Cooley, and Meg LeFauve is tremendous, highlighting and expanding on the strengths of the Pixar name when it comes to the writing. The humor is as sharp as ever, the big ideas within never overwhelm, the feels will hit you as hard as Pixar can manage, the story is paced perfectly, the back-and-forth is ingeniously detailed; the writing in Inside Out is utterly Oscar-Worthy. As someone who is interested in the ideas of psychology, I couldn't tell you how happy I was when I heard "REM sleep" mentioned.

Plus, can we all please reflect on the pure mastery of Michael Giacchino? His score for Inside Out is arguably his best yet, with only his tear-jerking work on Up coming close. It oozes warmth and compassion, even within such moments of chilly pain and humane devastation. The combination of his score and the images on screen gave me chills on multiple occasions, and tears were shed. I was borderline weeping at points. Bring lots of tissues folks.

And yet, even with all these impeccable qualities, nothing feels short-shifted or left unrefined. Inside Out will make you laugh, cry, and think. It will also make you ponder everything within your memories and the ember that glows within them. Pixar is back, and while I've said this before, this time it's the truth; Inside Out is the film of the year. And not even just that; I'm considering placing it in my top-ten of all fucking time. Everyone, please see this film as soon as you possibly can.