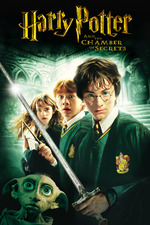 Harry Potter and the Chamber of Secrets 2002 ★★

Harry Potter and the Chamber of Secrets was one of my favorite films in the series when I was a kid. It has plenty of creature action (spiders! snakes! mandrakes!) while still attempting to maintain a lighter tone. But Chris Columbus isn't nearly as successful here as he was with Philosopher's Stone. For one, the material is much weaker. For a two hour and forty minute movie, Chamber of Secrets is packed with filler. The narrative isn't sturdy enough to allow for such an epic length. You can tell that JK Rowling had trouble finishing the book. This isn't nearly as imaginative and suffers from spinning its wheels before finally getting to the point. The end feels like a retread of the first film. Apparently there's even an extended cut out there, which is the last thing that Chamber of Secrets needs. The tone is also stuck between children's fantasy and clearly wanting to go darker in theme. It doesn't work here, especially when so much of the humor and quirkiness is elevated too. There's some stuff to like, especially that Aragog animatronic and subsequent spider chase, which is scary as hell. And the production design and score is still wonderful. But this is definitely one of the weakest films in the series.