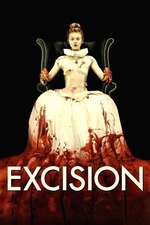 A tragedy written in the blood of those who couldn't find their way. If the world is impossible to endure, the only alternative left is to lash out, to make your own future, by any means necessary. While mostly gratuitous and gnarly in its gore, there's an underbelly of empathy for Pauline, a teenager who doesn't know how to shape her curiosities and instincts into a traditional form. How does one express themselves if there's no outlet? Excision finds the answer in an uneven mix of dark comedy and nasty body horror - attempting a satirical wave of humor while the horror is heightened in intensity and vividness. While I wouldn't quite say the film fails at this balance, it does favor the imagery of its grotesquery over characterization. But AnnaLynne McCord holds her own in an excellent performance, along with Traci Lords as the domineering mother. All in all, a memorably nasty picture.