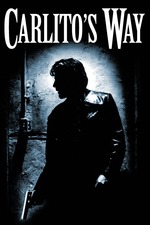 Brian De Palma sets the stage and Al Pacino just walks off, disco blaring. The two are usually only as electrifying as their material, and here, with a sharp, swooning machismo weepie, they both shine as bright as can be. De Palma's set-pieces, whether operatic (the final nightclub/train station chase) or intimate (the playful seduction between Carlito and Gail behind the apartment door) are perfect, and Pacino is given plenty of space to create. A key moment for both artists involves Carlito waiting in the bathroom and taunting the assailants outside after a drug-deal gone bad. De Palma watches from above with a high-angle as Carlito gets up the courage to leave the room, but even before that, Carlito turns the light off, causing an Argento color-shift from white to blue. Total control, elegance, and unassuming panache from every individual involved. It looks so, so easy, and yet, the high-wire act has never been performed at a more dangerous height. This movie shouldn't work, but it does. And it'll make you cry and quicken your heart and pulse and all the other side-effects caused by a dreamy movie seemingly beamed from another dimension. A masterwork, with one of the greatest endings of all time to seal the deal.