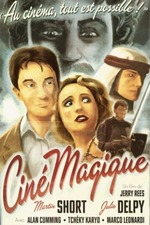 Holy crap, that was fucking brilliant. Along the same vein as another defunct Disney attraction, The Great Movie Ride, CinéMagique just loves movies, all movies, across history and language. This isn't just a clip show however, as Martin Short and Julie Delpy lead a story of a rude man thrust into the movie screen reenacting famous films and genres. Whether it be a chase in the Death Star, to a pie fight with Charlie Chapin, to trying to find Jack in the sinking Titanic to a gangster set-piece that then becomes an ode to Some Like it Hot, to stroll down the shops of Paris during The Umbrellas of Cherboug. It references anything it can in heartfelt, funny and exciting ways.

It's sad that this closed, especially as Disney seems more and more sure of itself to reference films from the past 15 years instead of the past 125.

But, for the few people who'll see this, and the fewer people who'll "like" this, please check this out. It's about 25 minutes long, and it's really special.