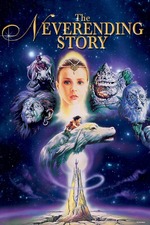 Like The Witches this is a children's film directed by an old geezer who has no experience or interest in making a children's film. But unlike The Witches, this film feels like it patronises the audience, leaning it's hands on it's knees and talking down to the audience "did you like that big dragon dug, son?" And that permeates throughout the entire film.
But Petersen's frank direction adds sinister undertones to almost every other aspect. From the scary creatures (see the king and queen of many lifeless faces) to the entire existence of Fantasia collapsing.
There's a pretty cool message about the importance of harnessing your imagination and if you play it right, it can become part of your reality. Which I love, but even as a nine year old I remember watching this and thinking "I get it, stop talking to me like I'm a eight year old!