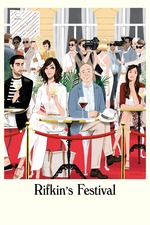 in Allen's latest, a sexless charmer with a built-in ad for San Sebastian's film festival, the filmmaker's long-ossified style curdles over itself to reveal playful re-enactments of the same European masters his protagonists have admired for the last 50 years.

the re-enactments here are worth juxtaposing with near-identical ones in Stardust Memories, Interiors, Another Woman, etc.. then, there was a sincerity that has now been hollowed out to reveal placeholders - art works that signify something nostalgic for Allen more than his actual interest in how they deal with existentialism. was Allen's work ever about actual existential crises, or have they always been, foremost, about his own ego as someone who deals with these issues and Rifkin's Festival is just the triple-distilled vision of this career-long obsession?

it's also worth juxtaposing Allen with his nonagenarian American peer, Clint Eastwood, whose Late Style has largely been beautiful articulations of the fact that it's never too late to grow and be graceful to others. with Allen, the fascination is particularly his refusal to grow - that he's still talking about the same bullet points of 70s NYC as a white paradise and European cinema as the peak of screen achievement, refusing to self-examine himself in any sort of meaningful way.

what we're left with in Allen's films, which are ostensibly about "the big subjects" is nothing but a commitment to the work. chop wood, carry water. that he manages to make them watchable is the trick, i suppose.

Magic in the Moonlight