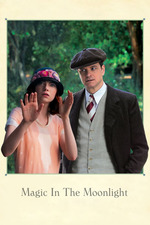 Magic in the Moonlight

of course, Allen's films are near Brechtian in actual comparison - like watching faceless pegs move around a board, particularly if you're familiar with the filmmaker's proclivities, particularly his self-indulgent rug pulls.

and yet, there's something comforting about this film and its formula. Firth's charm (although not his chemistry with Stone) goes a long way, as does Khondji's gorgeous France-in-a-snowglobe cinematography